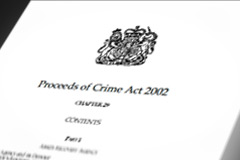 The Proceeds of Crime Act came into force on 24th March 2003.  It relates to the recovery and confiscation of proceeds made from criminal activities and money laundering.  This potentially includes money and proceeds generated as a result of Tax Evasion.

What is the Proceeds of Crime Act (POCA)?

The Act is the principal money laundering legislation in the UK.  It is an Act of Parliament which allows for the confiscation and recovery from the proceeds of crime.   This can form a number of guises.  Prior to 2002, the main laws regarding the confiscation of illegal gains were governed by the Drug Trafficking Act 1994, or the Criminal Justice Act of 1998.  These Acts still apply to any crimes committed prior to the 24th March 2003.  The POCA applies to all offences committed after this date.

The Proceeds of Crime is generally defined as the assets or money gained whilst undertaking criminal activity.  For Tax Evasion, it will be the amount of money that should have been paid in taxes.

Updates to the Proceeds of Crime Act

The length of a jail term will be dependent on the amount of money ordered to be paid under the Confiscation Order.   As an indication: –

If no confiscation order has been set, the court will issue a default sentence.

If you have an investigation call Kinsella Tax on 0800 471 4546 for help and advice.  We are currently offering meetings via Skype and Zoom.  All meetings and calls will be treated in the strictest of confidence.