Section 29 of the Taxes Management Act 1970 gives HMRC the right to examine a full assessment year and start what is knows as a ‘Discovery Assessment’. If you receive one of these letters from HMRC quoting TMA70/S29 (1), then they have information that you have underpaid tax or received too many tax reliefs.

Before replying to the officer who sent the letter, you should speak to a specialist.

What are Discovery Assessments?

They may be raised if income has not been declared, tax has been under-assessed, or excessive relief has been awarded. They are often issued in relation to an offshore bank and building society accounts, as these are harder for HMRC to find.

HMRC officers may raise discovery assessments if one of the two following conditions applies:-

There are instances, however, when HMRC officers may NOT issue discovery assessments:-

One interesting case in the Court of Appeal was Langham v Veltema (2004 (STC 544). Victory was awarded to HMRC when judges ruled that their officers may raise discovery assessments if new information comes to light. This was even if the taxpayer hadn’t been negligent or fraudulent in submitting their tax return. The case in question involved the valuation of a property from the taxpayer to a company owned by him.

The taxpayer had a professional valuation carried out on the property for CGT for his Self-Assessment Return. After this had been submitted a higher market value for the property was agreed (for the company’s Corporation Tax Return).

It was ruled that this constituted new information and that tax had been under-assessed. HMRC could not possibly have been made aware of this at the time resulting in an assessment not being raised.

HMRC then issued guidance for taxpayers to protect themselves. They said that in the additional information section of their return, the capital gain was calculated using an independent professional valuation. They gave the name of the person and company who carried out the valuation.

How far back can HMRC go back for a Discovery Assessment? Time Limits

As a result, If you have already undergone an investigation by HMRC and know that you have left out information then you NEED to contact a discovery assessments specialist who can guide you through. If you don’t, as a result, you could face HMRC on your own and risk going to prison.

It is that simple.

Call KinsellaTax with your enquiry and put your mind at rest. Call us now on 0800 471 4546 and speak with an expert today. 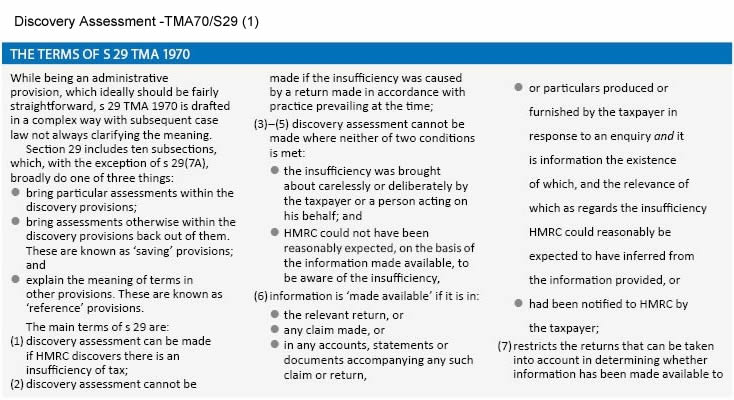