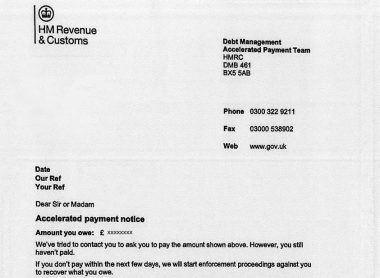 What Are Accelerated Payment Notices?

Notices from HMRC’s are called Accelerated Payment Notices (APNs). They state that they believe you have taken part in a tax avoidance scheme. They require the recipient to pay the amount of illegally avoided tax stated. This must be received by The Revenue within 90 days of receipt of the APN.

HMRC has been stamping down on all types of tax avoidance. By serving these notices HMRC takes away the luxury of the cash-flow advantage certain companies used to enjoy when they took part in one of these schemes. They could keep the money until HMRC obtained a successful ruling by the courts!

Have YOU Received an APN?

The scheme was introduced in order to collect disputed tax upfront. Since its introduction in 2014, HMRC has collected more than £1 Billion from users.

David Gauke, Financial Secretary to the Treasury said: “The Government does not tolerate tax avoidance and accelerated payments has been a real game-changer.”

“It is no longer possible for these individuals to avoid tax and sit on the money while their affairs are investigated. This first £1bn received in accelerated payments shows that we are turning the tables on those looking to avoid paying their fair share.”

Attempts made to question the legality of the APNs have been unsuccessful. High court challenge by investors in Ingenious Media film partnerships failed.

What do I do if I receive an Accelerated Payment Notice?

These notices carry no right to an appeal and it is not possible to negotiate with the Revenue on the sum stated in the notice. HMRC will not allow any flexibility on the 90 day limit for payment!

Whilst there is not a right to appeal, there is a right of representation. Certain conditions must be met. Either the conditions for an APN have not been adhered to or that the sum requested within it is not correct.

You may Receive More Than One

If you have been involved in a number of different schemes then you may receive more than one APN. They are generated one at a time, scheme by scheme, not by individual.

Do not ignore a notice like this, it will not go away.

HMRC do make mistakes! If you have received an Accelerated Payment Notice don’t respond on your own. Use us as your representation. We are here to help. We employ ex-Inland Revenue staff who are well versed in these notices. Call us today and don’t face this problem on your own. Call 0800 471 4546 for confidential expert advice!